Kayt was lucky to be born a country kid in Australia and since it was not possible for her to go down the road to the local shops, it taught her to be resourceful and creative.

Her early studies were in music – piano, clarinet, voice and choral conducting, which she studied at the Conservatorium in Newcastle, Australia, and then on scholarship at the University of Washington in Seattle, USA. Back in Australia she did an MBA, worked as an executive in two multinationals and then founded a boutique consulting group based in Sydney. Currently she works as a corporate strategist, change agent, and leadership coach to CEO’s and executives in multinationals and medium sized companies.

Kayt has always been intuitive. As a three year old, back in the day before ultrasounds, when her mother was expecting a child, she would tell visitors “Little Anne is coming to stay with us.” On arrival her sister was called Anne. 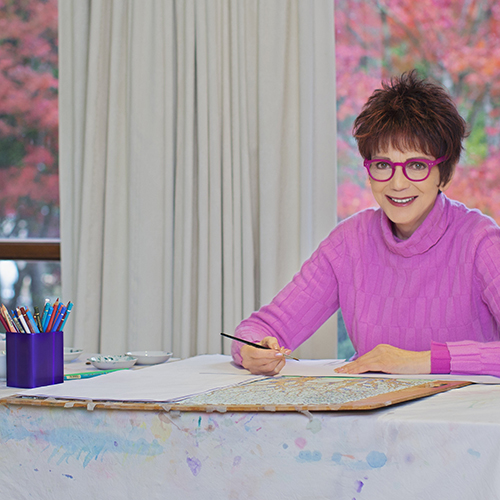 In 1996 her life was profoundly changed by meeting a group of Angels. They invited her to connect with them and paint them. Though not an artist she began to paint with these beings and was taught how to commune and co-create with them as colleagues and friends.

Kayt is an intuitive – an angel communicator receiving words and paintings in her heart knowing and sharing what is given. Kayt paints in her studio which is surrounded by a garden. Her painting style is spiritually inspired realism and the paintings are in watercolor. Each Angelic imbeds its frequency into the painting as it is being created. So when we see these sacred embodiments our hearts are drawn to the frequency of the Angel we need.

The workshops Kayt conducts are about co-creation and how to call on Angels and Archangels for assistance in any aspect of our lives. The inspiration, knowledge and tools in the workshops is guiding by the Angelics to support us being our best self, to enable us to live our best life and for soul growth. Since 2003 she has conducted Angel Workshops in England, Scotland, Ireland, France, USA and Australia.

Also, she brings through Angel Consults where an individual can bring questions and have a conversation with the Angelics through her. This is because she has learnt to tune into angel frequencies and can relay their words to you in answer to your questions. The Angel Consults occur in person, by phone or on Zoom.

The purpose of these Angel activities is so people can simplify and strengthen their connection with Angels and Archangels and use this practical knowledge and skill to empower and enhance their lives. Currently a book is being written and is the first of a series of books. Book 1 is in final draft.

Kayt’s Angel work is valued around the world and acknowledged for its divine purity. Both organizations and individuals praise her Angel activities.